We love to hear from you! Tell us how we are going by filling in our feedback form below
To Top

Kiama Golf Club was first formed in 1905 and our original “Course” was situated in Kiama on the current High School site. It remained there until 1932 when the club was forced to find an alternate location.

Mr Cyril Boyd had become interested in the game during this time and, on his own land, had built several rough holes on which to practice. He kept these mowed with a hand mower.

When Kiama Golf Club had to move, he offered his “golf area” to the club for a nominal rental of 10/- a week. As he was still running cattle on the land, he had to fence off the greens with barbed wire.

Mr Boyd left his farm jointly to his sons, Alan and Sam, but retained a life interest in it as they were still farming the area on which he played his golf.

The Land between Federal Street and the existing clubhouse was in reasonable condition but the rest had to be cleared of lantana and bracken fern by hand. The children in the area, the original golfers and their wives, all helped. This was approximately 1933 and there was a membership of around 15-20 combined members and associates. Eric Apperly was called in to design and develop a 9 hole course. The fairways were made by horse-drawn roller and the rough was chopped down with a crop mower. These were supplied by Mr Boyd.

In 1933 or 34 the first greenkeeper was employed. He was also caddy-master and employed several local boys as caddies. His name was Ken Tate and one of the caddies was Evan Evans.

In line with the best golf traditions two local doctors, Dr Stephen and Dr Crennar (both original members) were contacted whilst they were playing golf by the raising of different coloured flags on the flag pole. Depending on the colour, they knew which doctor was needed and he would come up from the course.

During the war, the club was kept in existence by the efforts of Dr Stephen and Mr Boyd, who encouraged the use of the hall for socials (the women would bring a plate and the men pay 4/-.) The course did, however, close down for part of the war years – from 1942 to 1945. The socials continued in this way though until the mid-sixties.
After the club resumed in 1945 the course was still very rough but membership grew to around 40 members and 20 associates.

The site of the existing 2nd green was where a cottage, owned by Mr Joe Moore, stood. This cottage was made of canvas, hessian, and galvanized iron. It was painted with white-wash and was in immaculate condition. Mr Moore and his wife would provide refreshments for the players and worked on the course. Joe and his wife went on to become the original caterers for the club.

As money became available, the clubhouse was extended and the course was re-designed and developed into an 18 hole course by Mr Alan Howard. This was October, 1957. The course was officially sighed over to the members in 1964 by Alan and Sam Boyd who were made Life Members. 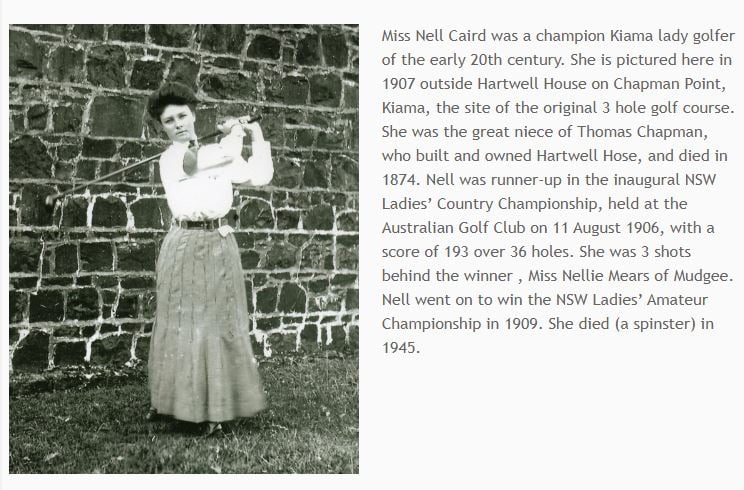 Keen on club history? Contact the Club to find out how you could
join our club historical team and help bring our shared history to life!
Email us at kiamagolfclub@kiamagolfclub.com.au

We love to hear from you! Tell us how we are going by filling in our feedback form below